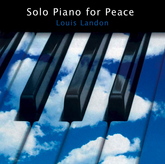 In the immortal words of John Lennon, who said, “give peace a chance,’ the ubiquitous phrase resounded throughout the world and is remembered by hundreds of thousands of people who understood as he did that aggression only serves to weaken the human spirit. The concept of peace has always been perceived as the sole responsibility of leaders from civilized nations. Confident in his beliefs, Lennon openly criticized governments for promoting unnecessary destruction. Had he lived long enough, he might have been able to articulate more fully, peace can only prosper as a collective condition of the human heart and mind. Solo Piano for Peace was Louis Landon’s answer to the idea that peace begins as a thought, and thoughts become reality when put into action. In June 2008, Louis began posting free downloads of his improvisations to the Internet each day. His motivation was writing one improv for peace every day until the wars in Iraq and Afghanistan are over. He received exceptionally positive response to his music from all corners of the world, prompting him to formally record the music. He then turned to Grammy Award-winning producer, Eric Tingstad who is a universally recognized icon within the contemporary instrumental genre. The collaboration between Landon and Tingstad sets the bar for reflective music lovers to visualize how a musical landscape opens subconscious channels in finding unique answers for love and peace, because without love, there can be no peace. As we project our individual translation of love and peace onto those we care about, the message is a contagious reflection of what we all really want in our lives. The cliché that music is a universal language really means music is the language of the universe serving as a catalyst for each of us to discover what peace means and where love comes from. Janet Hansen ~ from the liner notes1. Seattle Morning 3:44 2. Imagine 5:01 3. Centering 3:36 4. Heartland 3:50 5. Cinco de Mayo 4:38 6. Bittersweet 4:54 7. Skater Girl 2:53 8. New and Old 4:08 9. Court Dances 3:13 10. Fear Not My Love 4:00 11. Thankful 4:19 12. Rejoice 6:02 13. Resolution 4:19Total playing time 54:44All music written, arranged, performed by Louis Landon except "Imagine," written by John LennonProduced by Louis Landon and Eric TingstadEdited by Eric Tingstad at "All the Comforts of Home" Sammamish, WA www.erictingstad.comAll music recorded and engineered by Joe Bongiorno at Piano Haven Studios, Kenmore, WA www.joebongiorno.com/piano-haven-studio.php Recording dates: 8/4/2008, 8/6/2008. 1/25/2009, 1/26/2009Mastering by Rick Fisher, RFI/CD Mastering, Seattle, WA www.rficd.com/services.htmlArt direction and design by Janis Wilkins Cover art by Dan LevinA big thank you to my family, friends, and fans for their love and support. Special thanks to everyone listed in the credits of this CD for their input and creativity. My mission continues: to create a peaceful world by writing, recording, and performing music from the heart.Go to www.louislandon.com for information, bookings, CDs & sheet music. Album #LCICD0012 All music ©P2009 Landon Creative, Inc. (BMI) except #2 Imagine Written by John Lennon - Publishing EMI Blackwood Music Inc. OBO Lenono Music (BMI) Arrangement copyright ©2009 Landon Creative, Inc. (BMI) Reproduction prohibited Solo Piano for Peace was nominated for the 2009 ZMR Music Awards in three categories: Album of the Year, Best Instrumental Album - Piano, and Best Cover Art by Zone Music Reporter.Solo Piano for Peace was listed at #30 of the top 100 Albums for airplay in 2009 by Zone Music Reporter.Louis Landon solo piano music for peace. Solo piano sheet music is now available.

How to buy Solo Piano for Peace - solo piano