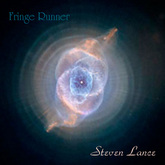 In the year 2211, due to galaxies colliding, humankind has long left Earth in search of another habitable world. The galaxy is dying as a wave of supernovas devastate all in its path and galacticentric blackholes coalesce. The only hope for humanity rests with the Fringe Runners. Courageous men and women running their dark-energy powered cruisers past the fringes of what is known, into the void of unknowing to reach new galaxy, sun and planet to call home. As humanity's hope presses on, guided by a beacon of music from some distant intelligence, this music is captured and sent back to the ark. As the "seeds" of humankind sleep the sleep of the cryogenically frozen, piped into auditory processors in their brains is this alien music sent back from beyond the fringe of our dying galaxy. May there be a new beginning."

Released: May, 2012
More about: Steven Lance

How to buy Fringe Runner

Also available at: As MP3 files, Fringe Runner can be purchased at Amazon or pretty much any digital provider of music