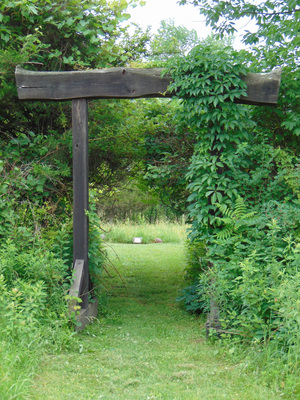 Unison is located on 13 acres at the foot of the Shawangunk Mountains in the Town of New Paltz, New York. The Unison property was farmed by the Bartz family until it was purchased by the early founders of Unison, including Stuart and Helene Bigley, who own the property to this day and kindly continue to rent the theater and grounds to Unison.

The Bartz family also continues its involvement with Unison today: Dahlia Bartz Cabe is a member of Unison’s Board of Directors, a faithful Arts Partner, and leads Extended Om chanting sessions several times a year at Unison.

In the early 1980′s Friends of the Mountain transitioned away from its role as a pre-school and began its evolution into Unison Arts Center, a multi-arts performance venue and visual arts gallery space.

On the cutting edge from the very beginning, Unison presented poet Allen Ginsberg, Galen Blum, John Herald, Priscilla Herdman and was one of the first venues for Playback Theater.

Over the years, Unison earned a reputation as a “Performer’s Favorite” for our focus on music, theater or dance; Unison was a welcome and refreshing change from the bar or club scene where artists had to compete with food and drink to get to the attention of the audience.

And audiences appreciate this spotlight on the artists as well – Unison was voted “Best Performance Space” by Chronogram Magazine readers.

In the year 2000, Unison received a Certificate of Merit from the New York State Assembly and a Certificate of Appreciation for Outstanding Contributions to the Arts by Congressman Maurice Hinchey in honor of our 25th Anniversary.

In 2004, with the help of luthier Tom Humphrey and financial support from La Bella Strings, Unison began a three year whirlwind of presenting the finest classical guitarists in the world. Out of their deep affection and respect for Tom and the magnificent guitars he constructed for them, Unison had the honor of presenting The Assads, Sharon Isbin, Eliot Fisk, the Los Angeles Guitar Quartet, David Starobin and was the first to present Zaira Meneses and Ana Vidovic as a duo. This popular and successful series was cut short by Tom’s tragic and unexpected death in 2008.

In 2006 and 2007, Unison was one of the recipients (including the Juilliard School, Lincoln Center and the Apollo Theater) of a special round of funding under the New York State Music Fund series. Under this two year program, Unison was able to present, Ray Wooten and the Black Mozart, Pink Martini, Josh White, Jr., Victor Prieto Jazz Trio, Pablo Ziegler, Portland Taiko, Lil Malcolm and the Zydeco House Rockers, Roswell Rudd, Trio Globo, Isle of Klezbos and in an unforgettable appearance, one of the last performances by the legendary Odetta.

In 2012, founding, artistic, executive director Stuart Bigley retired, after leading Unison for 37 years. Still our next-door neighbor, Stuart is our in-house photographer at most of our events, and always available to help with advice and experience.

Carol Robins stepped in during the transition period as Unison searched for a full-time executive director and in September of 2013, Unison welcomed Christine Crawfis. Christine brought invaluable non-profit expertise from her years as New Paltz Regional Chamber of Commerce’s Director of Marketing and Communications and her teaching role for Bay Path College’s Graduate School of Non-Profit Management and Philanthropy. And of course, as local theater lovers will attest, Christine also brings artistic expertise as both actor and director with Mohonk Mountain Stage Company.