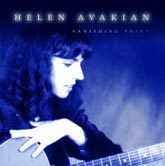 "There is a courageously idiosyncratic sound at work here, creating a warm, lacy realm of reality and romance...one of the finest sounding discs ever to come out of the Hudson Valley." -- Michael Jurkovic Rhythm and News Magazine

"Vanishing Point" takes the unique meld of folk, classical, flamenco and pop that is pure Avakian, and adds the most tasteful and tasty touches of pop and new age to create a Helen in four dimensions; a virtually perfect gem-like setting of ensemble music that is scrupulously crafted to enhance Helen's unique gifts, as a fine ring sets off a rare diamond. It is chock-full of a very clearsighted intelligence both musically and lyrically that is rare in current pop. The singing and songwriting are nothing short of superb--one of those haunting voices that once heard can never be forgotten. In a just world this indie album would be a shoo-in for a Grammy--equal to the absolute best of what's out there, and far, far superior to most." --Michael "the Moose" Dmoch Founder, MidHudson FolkFest, Rosendale Street Festival. "Vanishing Point is Helen Avakian at her best!"

How to buy Vanishing Point