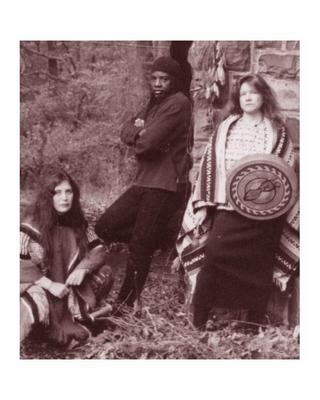 GaiaWolf’s original music uses excellent grooves, catchy melodies, and interesting harmonies to call attention to such issues as human and environmental peace and the need for universal harmony so that all earthlings can someday share this beautiful planet in peace.

The highly original sounds and songs of GaiaWolf transcend pop culture and infuse hope for the future with their ‘music for the planet,’ from the heart. Blending diverse elements of folk, reggae, jazz, world music, pop, and R&B into a distinctive sonic sculpture, the alchemy of GaiaWolf was created by musician/composer/vocalist E.C. Lorick and vocalist/percussionist Dawn Casteel-Lorick with guitarist/vocalist Marji Zintz.

GaiaWolf has shared the stage with legendary artists Pete Seeger and David Amram at the Howland Cultural Arts Center as well as performing at renowned festivals like the Rosendale Street Festival, the Woodstock Reunion at historic Yasgur’s Farm, the White Feather Folk Festival, and the Hudson Valley Summer Music Festival. They have shared the stage with Vance Gilbert, emma’s revolution (Pat Humphries and Sandy Opatow), the Kennedys, Spook Handy, and SONiA with Disappear Fear at music festivals for NJ Peace Action. They have performed at the prestigious National Animal Rights Conferences (2002 & 2003) in Washington, D.C., and have participated in benefits such as the NY Walk for Farm Animals in NYC and for organizations such as New Jersey’s Shelter our Sisters, Orange Environment, the New Jersey Ecological Society, the Ulster County ARC, Orange County Peace & Justice Coalition, Sullivan Peace & Justice, the Woodstock-New Paltz Crafts Fair, and the Blue Sky Peace Fest. Their composition, “Keeper of the Keys,” was selected to be the theme music for a GAP (Great Ape Project) promotional video.

Composer and multi-instrumentalist E.C. Lorick is a co-founder of GaiaWolf. E.C. writes and sings most of the songs GaiaWolf performs. He has an extensive career as a musician, playing electric and acoustic guitar, bass, harmonica and singing both solo and with others. He is a prolific composer and arranger, and is the leader of this fine group of artists. He also puts his considerable musical ear and wisdom to work for others as the owner/operator of littleGIANT Production and Recording Studio, located in Woodstock, New York, where he produces, arranges, and records projects for others.

Co-founder Dawn Casteel-Lorick is a gifted vocalist and the percussionist in the band. She brings a sweet voice and on-target harmonies, but it is her passion for the material that really shines through! Dawn also has a business called One Kindred Paw, as an “advocate for animals and consultant for their people.” She does energy work, communication, ceremony, etc.

With a voice that has been likened to Joni Mitchell, Ricki Lee Jones, the late Eva Cassidy, and Shawn Colvin, Marji Zintz is a vocalist, arranger, and acoustic guitarist who is known for her sweet voice; heart-felt, soulful interpretations; spot-on intonation; extensive, genre-busting repertoire; and masterful guitar playing and who makes up the other third of GaiaWolf. As a solo performer, Marji receives wide acclaim in the New York and tri-state region in both the jazz and folk genres. She has performed and recorded as a soloist and in duet settings with various bassists, including Mike Richmond, Joseph Pelletier, Jay Anderson, and Steve Roane, as well as in larger ensembles with Jim Kunkel, Wil Greenstreet and Ron Wilson, and improvisational vocalists Victoria Christgau and Shula Ruth Weinstein in Sister Sound. As a solo performer, Marji has shared the bill with such diverse acts as Koko Taylor, Tom Paxton, Jonathan Edwards, the Kennedys, and Robbie Robertson.