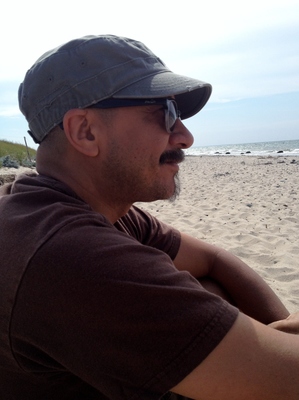 Armed with a guitar and a vast arsenal of original material, Gus Amador provides the audience with a unique soul searching live performance. His CD “2 Short of 12” is a collection of songs that embodies various genres of music that has influenced his writings over the years and which has been dubbed “Acoustic Folk Punk Rock“. Gus has been in the music industry for over 25 years dating back to his first band "Quiz Kidz" in the early 80's and to his last band "Ocean in a Cup" in the late 90's. Since 2000, he has performed as a solo acoustic act at the following venues
The Black Cat Cafe in Irvington
Coffee Labs in Tarrytown
Mr. D’s in Yonkers
Paulie’s in Pleasantville
Cubbyhole Café in Poughkeepsie
BWC CoffeeHouse Series in Bronxville
Southside Inn in Mahopac
Danny's Cafe in Ossining
McCarthy's Pub in Carmel
The Kent Library in Kent
Mount Kisco Library Coffee House in Mount Kisco
Beauty From Ashes Benefit Concert in Brewster,
Vinyl Lounge in Nyack
Holy Grounds Cafe in Fairfield Ct.
Rev (The Parlor) in Hudson
Bank Square Coffeehouse in Beacon
The Coffee Shoppe in Beacon
Spotlite Cafe in Scarsdale
Boardwalk Music & Arts Festival in Rye
Art at the Park in Rye
Scott Place Cafe in NYC
Hanks Saloon in NYC
Branded Salon - NYC
The Bitter End in NYC
Parkside Lounge in NYC
Starving Artist Cafe in NYC
MMNY (Make Music NY) Festival in NYC
NADDS in Baltimore, Maryland
Bayshore Coffee in Naples, Florida.
Open Mic Night in Pleasantville's Circle of Friends, Peekskill's Studio 2 , Cold Spring's The Listening Room’s Music Series, Pleasantville's Lucy's Lounge, Peekskill's 12 Grapes as well as appearing in both cable access shows The Working Musician and Music from Bob's Basement.

In 2014, Gus teamed up with Buddy Coughlin/Bass and Tony Damiano/Drums to form the BGT Band. : After a successful last gig with the BGT Band in 2014, I've decided to go on an indefinite hiatus.

Update: 2022 Oct: It is apparent that my hiatus is still on going, but I have done some recordings that can be heard on my Reverbnation music page.

www.reverbnation.com/gusamador where you will find the latest DIY recordings.

I would like to thank all of you that supported me over the years. I hope my music inspired and enlightened your mind.