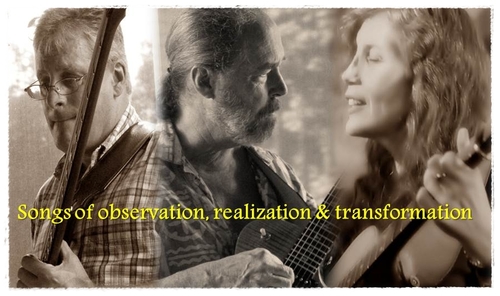 Vocalist/guitarist/percussionist Marji Zintz fronts Becoming Human, a newly formed trio (and sometimes quartet), which performs music composed by guitarist Jim Kunkel and bassist Mickey Kopchak. They explore and inhabit many genres across the musical spectrum, from folk to jazz, modal to avant-garde, spiritual to classical to Brazilian. They honor the space and each other’s unique and evolving “voice,” creating and holding a fertile ground for conversation, interplay, improvisation, and emotion.

Marji brings a long and diverse performance resume, working in myriad settings since the 1970s as a vocalist and guitarist. She has performed in voice-double bass duets with such notable players as Mike Richmond, Jay Anderson, Josef Pelletier, and Vin Warner. She also worked in a progressive jazz-based ensemble that included Erik Lawrence on reeds and Jim Kunkel on guitar, often using her voice as one of the horns. She has worked in collaboration with improvisational vocalists Victoria Christgau and Shula Ruth Weinstein in a mostly a capella recording and performance project called Sister Sound, and has arranged, recorded, and performed with many other innovative musical projects over the years as well as performing extensively as a soloist. She teaches guitar and coaches voice and harmony in the Hudson Valley.

Versatile guitarist Jim Kunkel has composed music for independent films and documentaries such as the Aspects of the Arts series profiling poet Dan Masterson and artist Frederick Franck. As leader and sideman, he has performed and recorded since the late seventies, including a quintet that performed many of how own innovative compositions. Jim has a lengthy list of musicians who have studied with him over the years, many of whom have gone on to enjoy a successful music career.

Mickey has been playing bass professionally since the age of 10. Known not only for his sensitivity and presence, Mickey expands the sonic assignment of the bass by tastefully and creatively employing a multitude of interesting effects, creating rich and expansive soundscapes, as well as reaching emotional depths. Because of his versatility, expertise, and dedication to excellence, he is widely sought after and has performed and recorded with jazz and pop artists throughout the northeast.