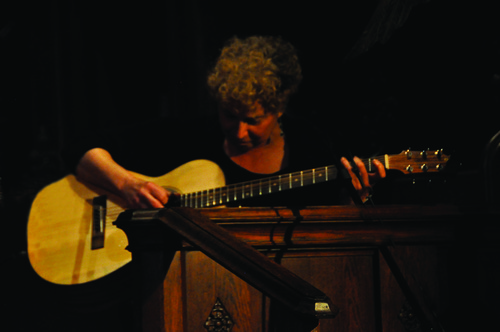 2022 Capitol Region Blues Challenge Finalist and 2009 Telluride Blues Challenge Finalist, Robin O'Herin, specializes in historically rich, often interactive concerts that include original and traditional American music, for small listening rooms, libraries, festivals and schools. Her concerts are warm, affirming experiences she shares with the audience. Let her take you on a journey of musical exploration through the Delta and Piedmont regions of the South. Song selections may include Robert Johnson, Blind Willie Johnson and Robin's own original blues and fingerstyle ballads.

Robin was a finalist in the 2006 Memphis Blues Challenge. She also played in the Tropea Blues Festival in Trope Italy in September '06. She was the headlining act in the Resophonic Blues Festival in Pilzen, CZ. in '05. She opened for the Doobie Brothers in Pittsfield, MA. and for Vance Gilbert and Michael Powers in Sept 04. Her arrangement of "Old Country Rock" and her original "Everhopeful" were used in the soundtrack for the PBS "2005 Roadtrip Nations" Series (episode 4). Robin has shared the stage with Brother Sun, Paul Geremia, Andy Cohen and Roy Bookbinder. She is currently working on a new CD. She has served as song leader in several churches and led a traditional gospel choir.

CDs and downloads are available at htttp://www.robinoherin.com/cds.html


Banks of the River