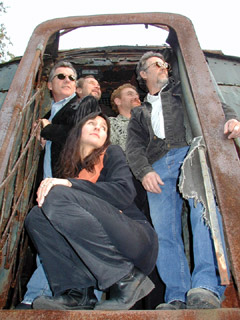 How do you say that name?!? It's like Lorraine with a 'D'. The name Dorraine comes from a Johnny Cash song that he recorded in the late '60's. The artist Dorraine comes from the hamlet of West Shokan, NY located in the Catskills near Woodstock. Born and raised there (also in the late '60's), she began playing violin at age 8 and got her first regular band gig at age 15 with The Suttons, a bluegrass band. Dorraine has been singing and playing upward of 50-100 shows per year ever since. Past bands include The Suttons, The Pontiacs, Wild East, Little Creek. Currently managing and performing in a popular 5-piece new country/rock cover band in the Hudson Valley known as Thunder Ridge, Dorraine also performs occasionally with the Phantoms Acapella, Head Soup and an acoustic originals trio called Blind Mice as well as making guest appearances with other artists if time permits. Kicking off 2010 as a guest at Levon Helm's Midnight Ramble, Dorraine has also shared the stage with artists such as Diamond Rio, John Sebastian, Cousin Brucie, Charlie Daniels, George Jones, Bill Stains, Little Texas, John Hall, Baillie and the Boys, Kathy Mattea, Waylon Jennings, Rockapella & Krishna Das just to name a few. She has also made appearances on radio stations:WAMC/Performance Place, WPDH in Poughkeepsie, NY; WTBQ in Florida, NY; WDST in Woodstock, NY; WRWD in Poughkeepsie, NY, Radio Woodstock on the Internet and on Wanda Fischer's Hudson River Sampler on WAMC/Northeast Public Radio network and with Jay Ungar & Molly Mason on their live WAMC radio show "Dancing on the Air", as well as at The Bitter End in NYC, the Towne Crier in Pawling, Caffe Lena as well as TV appearances on Poughkeepsie Live and Bobby Flay's Food Nation on The Food Network. Although involved in many recording projects throughout her music career with her own bands as well as guest spots on other artists' works, "I'm Gonna Sing" is her first solo CD, to be released in February 2005. The disc was mastered by Emily Lazar at the Lodge in NYC and includes guests Sara Lee, Eric Parker, Ronnie Sutton, Martin Keith, Robert Burke Warren and Ralph and Lucia Legnini & Katie Taylor. The title cut is being very well received in the music industry so far. The tunes on the CD are varied and have an easy-going melodic feel...mostly acoustic, and definitely come from her heart. Having sung leads and backups for many years, Scofield has a wide vocal range and adeptly belts out some edgier stuff along with crooning the softer stuff. (Think: somewhere between Bonnie Raitt, Linda Ronstadt, Joni Mitchell, & the Indigo Girls). She also plays 6 & 12 string guitars, percussion and viola on the project.

The "Whatever Show" #20 Dorraine Scofield from Dave Laks on Vimeo.