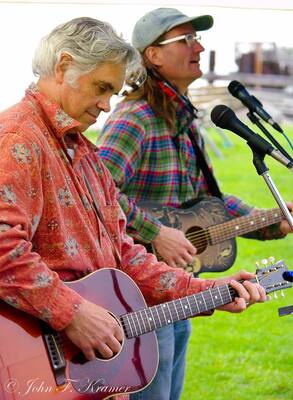 In June of 2003, Anna Canoni was looking for a couple of singers to help celebrate her grandfather
Woody Guthrie's birthday. She had organized a "hootenanny" at a Westchester record store and
asked her friend radio host Frank Matheis to refer her to some people who could do a good job
of singing some Woody Guthrie songs. Frank invited Fred Gillen Jr. and Todd Giudice, two local singer/
songwriters who had performed on his radio show. Giudice brought along multi-instrumentalist Steve
Kirkman, who was also a well-known songwriter in the Hudson Valley. That day, along with Lowry
Hamner, Sarah Lee Guthrie, and Johnny Irion, these singers illustrated the true meaning of the word
"celebrate," as they passionately sang the wonderful and still very relevant songs of this American
icon. During the course of that year the four Hudson-valley residents of the original hootenanny
crew met several times to celebrate the life and music of Woody. The following summer, after mentioning
to a festival board member that they could lead Woody songs, Kirkman, Giudice, and Gillen found
themselves leading a Woody sing-along at the Clearwater's Great Hudson River Revival. The three
decided the morning of the festival that they should probably rehearse a bit, and at least make it look
like they knew what they were doing, and during that rehearsal on the festival grounds Gillen suggested
that they call themselves Hope Machine, which came from a Woody Guthrie quote: “About all a human
being is, anyway, is just a hoping machine.” This was the birth of the band Hope Machine. Not long
after that first Clearwater show, Giudice left the group and the format was loosened up to include any
song which might celebrate the idea that people are hoping machines. They also began to invite guests
to perform at their shows with them, and consider anyone they meet with an instrument or voice to be
a part of the group, if only for one night. This spirit has made their performances true celebrations
of community, spontaneity, and freedom. Their debut CD March, which was released in the Winter of 2006/ 2007,
was recorded live-in-the-studio with guests Steve Chizmadia, and Laurie MacAlister and Abbie Gardner from the well-loved band Red Molly. This CD received folk airplay all over the East Coast and sold well on-line and
at live shows. The follow-up to March, Big Green Hope Machine, features some new musicians.
Steve Kirkman and Fred Gillen Jr. are still the core of Hope Machine, joined often by Abbie Gardner,
and on this release they also enlisted their good friend and young folk hotshot Anthony daCosta,
plus Matt Turk, Scott Urgola, Julie Corbalis, and Grammy-winning fiddle player Lisa Gutkin.